The Difference Between Monocrystalline and Polycrystalline Solar Cells

When shopping for a solar PV system, you are likely to encounter two types of solar panels, monocrystalline or polycrystalline. Both types of panels are manufactured using crystalline silicon. This brief guide on the drawbacks and advantages to both of these could help your decision process. 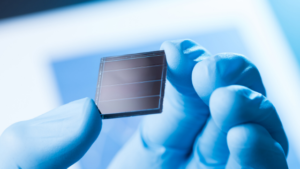 Monocrystalline silicon cell panels, as the name suggests, are made up of single crystal of silicon. They are recognized for their sleek dark black color and their high-efficiency ratings. Monocrystalline cells are manufactured by forming silicon into bars or ingots, which are then cut into wafers. The cells, being made up of a single crystal of silicon, allow more movement to electrons, which generates a flow of electricity. This is why they are known to be more efficient than polycrystalline cells. The manufacturing of monocrystalline cells is more expensive, and this cost is also passed along to the buyer. The process also creates more waste as the corners of each cell, once cut into a wafer, are shaved to create the typical cell shape.
If you are limited for space on your roof, then monocrystalline panels would be beneficial to you as the high efficiency will help to maximize production. Monocrystalline panels are also likely to result in higher returns on solar investments when purchased.

Polycrystalline solar panels have an iconic blue color. Generally, they are not as efficient as their monocrystalline counterparts. The most significant advantage of polycrystalline panels is a lower cost for both the buyer and manufacturer, although the blue color makes them more common in commercial solar projects rather than on homes. Polycrystalline solar cells are also made up of silicon. However, these cells are made using several fragments of silicon as opposed to a single crystal. Manufacturers melt the silicon and pour it into a mold to create a square. Once cooled, the silicon is cut into the square wafer shaped cells. The manufacturing process here is much more straightforward as well as clean, and there is no silicon waste. However, due to the presence of many silicon crystals in each cell, there is less space for electrons to move, thus lowering the efficiency ratings for polycrystalline panels. The apparent advantage of polycrystalline solar panels is the lower cost for both manufacturers as well as buyers.